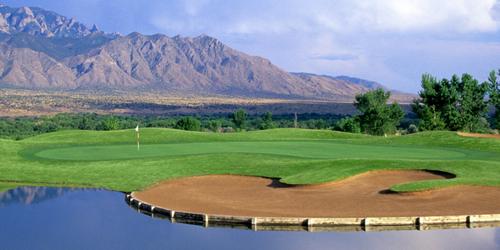 Inquire For Custom Package and Pricing Designed for You.
Golf Package Inquiry »

Experience a completely unique and authentic journey into the ancient lands of the Tamayame people at Hyatt Regency Tamaya Resort & Spa. Nestled on 550 acres of the Native American Santa Ana Pueblo between the Sandia Mountains and the Rio Grande River, Tamaya is steeped in over one thousand years of rich history and culture.

Santa Ana Golf Club
There's a reason Santa Ana Golf Club has been featured by such prestigious publications as Golf Digest, Golf Magazine and the New York Times. It's the same reason that officials tapped Santa Ana as the venue for the 2009 PGA Professional National Championship, and there's a reason it is part of My New Mexico Golf, two of the most celebrated golf facilities in the Southwest.

The reason is that Santa Ana Golf Club is a gem of a course.

Santa Ana Golf Club reserves the right to change price and offer at anytime. Prices and offer are subject to change without notice. GolfingNewMexico.com is not responsible for errors posted in this golf package.